This anecdote comes from a producer who I work with regularly. He was touring as sound engineer with Scottish comedian Billy Connolly before Billy had become famous.

They arrived at an open-air ampitheatre on a miserable grey day and set up and did a sound check. The day got gloomier and gloomier until about one hour before the gig the heavens opened and it absolutely poured down. Assuming the concert was a wash out, Billy nevertheless took a look at the public area to make sure it was empty. To his surprise there was one man sitting there with his arms folded enduring the heavy rain waiting for the show to begin. Billy said that if he was willing to watch him in pouring rain, then he ought to put on a show for him, so he performed the whole first act. During the interval Billy thought that the man would probably call it a day and not endure another half hour of relentless rain….. but there he was, arms folded, hood up, waiting for Billy to do his thing, so Billy went out and performed the second half of his show.

Towards the end Billy stopped his routine and said to the man “You’re the only person here so if there’s any particular sketch that you’d like to see or a routine from one of my videos I’ll do it for you as you’ve sat through the pouring rain”. The man replied “No, it’s ok Mr. Connolly, you just tell me when you’ve finished and I’ll get the chairs packed up and we can all go home!”

This anecdote comes courtesy of Guy Pratt, a bassist who has toured extensively with many great rock bands and thus has many a great story to tell. This isn’t a particularly in depth or scandalous story but just one that makes me giggle and gives a sense of the vibe of life on the road.

Guy was touring with Pink Floyd and a Saudi prince had lent the band his Boeing 737 for the tour (if you can’t join them, lend them your jet) which of course was not your average 737 – this one had been kitted out with marble walls and the latest gadgets. As in standard flights, when the aircraft was about to hit turbulence, the pilot would announce this through the tannoy and recommend that everybody remain seated and fasten their seat belts. This was when the band shot to their feet and, without holding on to anything, starting the competition of who could stay on their feet the longest. 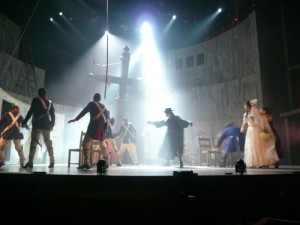 There was a lot of music to play from memory and this had to be co-ordinated with various stage positions and choreography (moving into the right spotlight at the right moment, following visual cues etc.). All of this made is quite daunting and of course there is the pressure of having to get it absolutely right. The guitar parts (some to be played whilst walking) weren’t the easiest either…

There was no dress rehearsal for me, but we did have a rehearsal during the day of the show just to run through the sequences and cues. During this rehearsal the resident director said:

“David, after the fight scene between Zorro and Ramon (the bad guy) you will go on and play your solo piece before the big cabaret style bows with full company. During the fight scene a chair leg is used as a weapon and will be left on stage. It is very important that you collect this chair leg after you’ve played your solo piece and before you leave the stage. Otherwise it will trip one of the dancers over during the bows. This is VERY important David, you mustn’t forget!”

Ok, another thing to remember, but not a problem. I just have to remember to get the chair leg before leaving the stage….

At the end of the rehearsal a technician came to me and said:

“David, at the end of the fight scene between Zorro and Ramon there will be a chair leg…”. Anticipating what he was going to say next, I replied:

“And I have to collect it so that nobody trips over it, right?”

“Yes, but I can’t stress how important this is, you MUSTN’T forget!”

So if it wasn’t clear before, it certainly was now – I HAD TO collect the chair leg.

The big night arrived and I dressed up, warmed up, and on stage I went. The first half went well, everything remembered, no hiccups and then the second half: the opening went well, Bamboleo scene great, nailed the Djobi Djoba dance break and then for the solo at the end of the show…

… I went through the solo back stage and reminded myself about the chair leg just before going on. As I was waiting to go on the resident choreographer came to me and said:

So on stage I went, playing the solo piece to end the show. No mistakes, finished nicely. Then the blackout and I have about twenty seconds to find the chair leg and get off stage. I get on my hands and knees in the area where the chair leg should be and… nothing! So I move right a little bit and… nothing! Left a little… nothing! Now I’m thinking:

But at the same time I couldn’t leave the stage without the chair leg. The twenty seconds I had seemed endless…

As I scrambled relentlessly trying to find that damn piece of wood a technician grabbed me from behind:

“David, quick, you need to get off stage for the bows!”

“But I need to get the chair leg!”

“Oh, don’t worry about that! We’ve already picked it up” he replied. “We decided not to take a chance on your first night”